Does The Delrin Frame Bushing Surpass The Competition?

A robust engineering plastic with metal-like properties. Delrin Bushings operate with high strength, Fatigue endurance, and stiffness. Resistant to gasoline, solvent, and chemicals, but the material is rather expensive to manufacture from. After many years of using Polyurethane for our trackbar frame side bushing, we now use Delrin Exclusively for this component position.

But the question remains, “why do I need a Delrin Bushing for my trackbar instead of standard rubber bushings or poly bushings?” The most valuable asset we were interested in was Delrin's wear resistance, quiet operation, and resistance to heat.

Throughout this article, we’ll explain why we chose to use Delrin for our track bar instead of going the traditional route. In our opinion, the benefits outweigh the cost and we’ll explain why.

What Exactly Is Delrin?

Delrin is comprised of Advanced Acetal Resin. Simply put, it’s plastic, but no ordinary plastic. It is a highly versatile engineering polymer that has been around since the 1960s and bridges the gap between metal and plastic components. 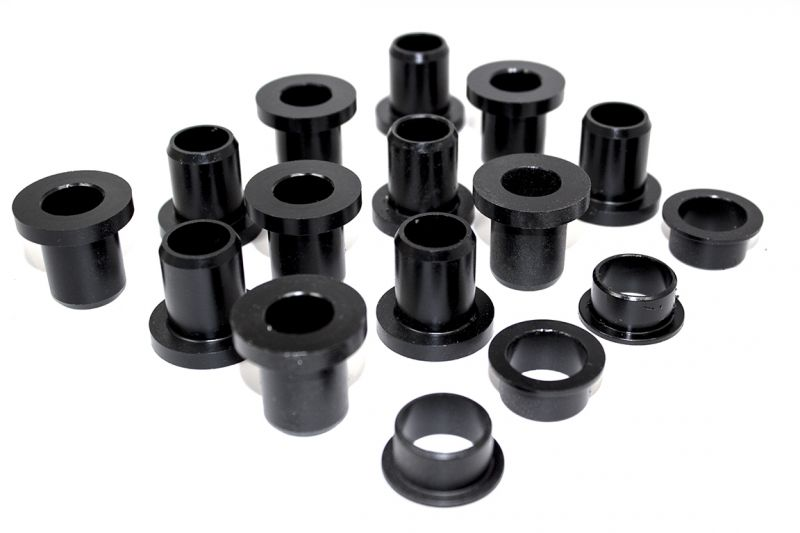 Designing Suspension That Can Endure

Designing suspension systems is what gets us up in the morning but dialling in the details most people don’t even notice is what puts a smile on our faces. Why? Because we know it will endure the harshest environments, improve the steering and handling quality, and keep performing despite the abuse you put it through.

Some might say the Delrin bushing is the gold standard then you need rigid bushing material, and while we may not disagree, it was not our main motivating factor when deciding to use it. High Durometer Poly bushings can be just as rigid and are much less expensive, but for the track bar frame bushing, the properties of Delrin are a big jump in overall quality.

We chose Delrin bushings for our Thuren Fabrication Track Bar after some harsh R&D in the rock sections of Moab, Utah. We received feedback from some of our customers that the Polyurethane Bushings were loose after a few hours of mild use moving slowly while rock-crawling, and we had the hardest time figuring out why!

Most of our Dodge Ram customers have spent hours upon hours blazing the trails, and have had zero issues regarding our standard Poly track bar bushings. It was hard to understand but after much consideration, it was determined that heat was the issue. Slow-speed crawling in Moab the poly bushings were not receiving the same airflow as that of higher-speed driving, and the radiant heat from the hot engine combined with the high ambient temperature was basically melting the Polyurethane.

This was unacceptable and we went back to the drawing board to find the remedy. Enter the Delrin solution. Delrin has a 250*f temperature rating, which solves this issue.

Why Use The Delrin Bushing Design Over Polyurethane Or Rubber Bushings?

Originally the Thuren Fabrication Track Bar used polyurethane bushings and it worked well. The Poly bushing had very little deflection during use. We bashed our trucks across the desert and the Polyurethane bushings held up, and the price was right, so it all made sense to us.

*Standard vulcanized rubber bushing below on the right, virtually identical to what is supplied as the trackbar bushings on all Ram trucks from 1994 - 2022 with very few changes over decades. Standard 3 piece Poly bushing is shown on the left below. 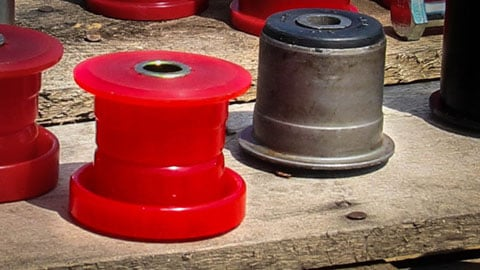 From the factory across most manufacturers, rubber bushings have been the most common material used for the track bar bushings. Even in their brand new state, rubber has no place in a steering component, and we mostly need to think of the front track bar as that, a steering component. Rubber deflects a considerable amount to absorb vibrations, and that rubber-flex leads to sloppy steering.

Polyurethane bushings are adequately rigid and reduce deflection under the highest performing circumstances, while still offering a bit of vibration damping. One downside of polyurethane bushings is they require a high-performing grease to be applied often. Even the most capable grease will break down eventually causing the poly bushings to heat up, wear down, cause binding, create noise all within the metal bore housing.

Delrin And Its Advantages

The Delrin bushing promotes many enticing properties such as high impact strength, high tensile strength, and a low deflection rate.  Its ability to self lubricate and maintain shape in higher temperatures is unmatched, and being free to move through the entire range of motion, the Delrin bushing has zero binding and maintains its rigidity. We designed our Delrin bushing to allow the track bar housing to pivot around its exterior, as the front axle moves front-to-rear a bit when the axle cycles mandating that need. We tried to think of every detail so our bushing will last as long as possible.

Delrin is expensive to put into production.

The cost to use Delrin is high compared to molded Polyurethane. In the end about 5x the cost. The reason being is that when a precise part is needed, it must be machined to size. We machine our bushings in-house from solid 4 foot sticks of 1-3/4” diameter Delrin rod, which takes substantial time on a $75,000 machine. 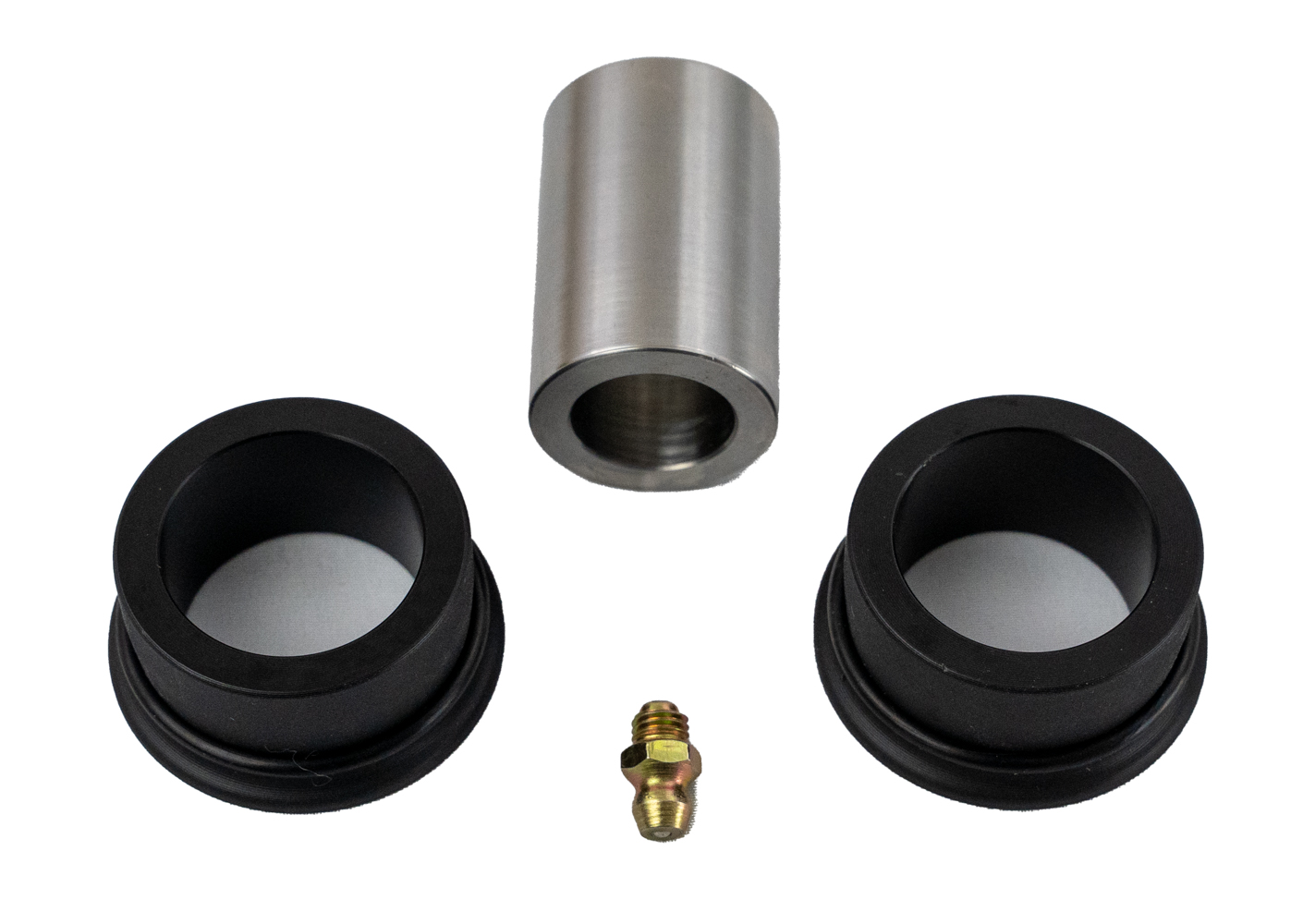 Follow us on social media for the latest projects, prototypes, testing, shop day to day, etc!

Have an off-road suspension shop and want to team up with us? Become an Installing Dealer today!!